10 Most Popular Languages for Localization

When carrying out localization for your application, there are many things to consider. Among these are code changes, choosing a localization team to collaborate with, and which local markets to enter.

In this post, we will focus on local markets while sharing language usage data for both source and target languages. As a reminder, the source language represents the default language of the project.

First, some TL;DR excerpts for people in a hurry:

And the top 10 ten target languages for-profit projects are:

Data on for-profit projects provide a better view of local markets’ performance. Having this knowledge can help guide you on your first steps with localization. Where are the top-performing local markets? When in doubt, which local markets should you exclude or include in your strategy?

We start with the top ten target languages, as seen below. 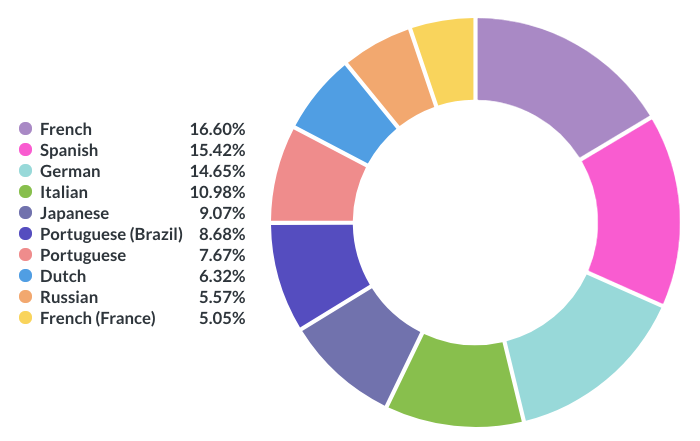 In these figures, we see that French is a dominant local market, represented by two locales in the list. We can also note the absence of Asian markets in the top ten list, except Japanese, which is in the top five.

Japanese and Portuguese (Brazil) highlight the dynamic nature of these markets for localization.

As you can see, English is the prevailing market by a considerable margin. The English locales give some information on the projects’ country of origin. The United States is in second place and the United Kingdom in third place.

Finally, Brazil and the Netherlands seem like important markets for innovation. Portuguese (Brazil) and Dutch as source languages highlight the active development in these languages. 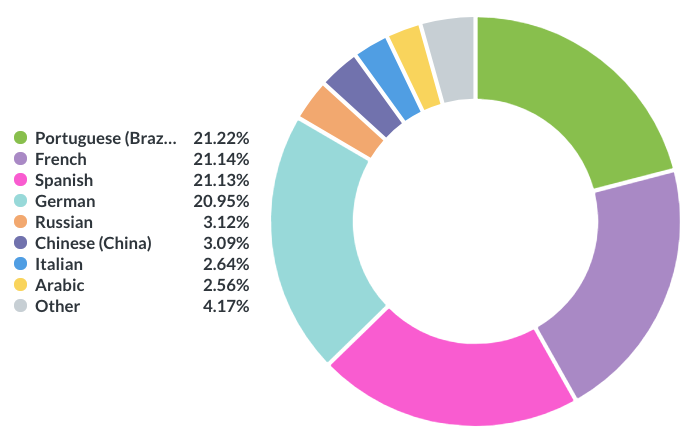 We can see from these graphs that the top four positions share 85% of the total open-source project count. Moreover, these four languages share an even percentage distribution. Portuguese (Brazil), French, Spanish, and German communities are significant for open-source project localization.

The following graph illustrates the vast gap between English and other source languages.

English is prevailing, capturing the top three positions in its various forms. Like for-profit projects, English variations are indicators of the country of origin. For example, English (United States) usually means that the project was founded in the United States.

There are four European markets (Russian, French, German, and Spanish), two Asian (Chinese and Japanese), and one from Latin America in Portuguese (Brazil).

Wrapping it all up

Some trends are present in both for-profit and open-source projects. These similarities highlight a global trend regarding software localization in general. Let’s analyze each trend below.

English is the global language. This is demonstrated by the source language used by both subcategories of projects. Even English (US) and English (UK) locales match across for-profit and open-source projects.

Brazil is important in software innovation. In both subcategories, Portuguese (Brazil) as the source language is high in the lists. Since we measure usage of the Transifex TMS, we can infer an interest in entry to local markets for software created in Brazil.

The Netherlands is an emerging market in for-profit software innovation. Dutch positioning in the top ten for-profit source languages supports this assumption. A report on the Netherlands SaaS companies backs this up, and localization is playing an important role.

In the next post, we will analyze data from specific verticals of localization. This way, we can gain a better understanding of the localization landscape and its current trends.