Video game localization is arguably one of the roughest types of localization. Handling such media-rich content and all the different levels of interaction with it is definitely not an easy task – which is what we are going to be talking about in this post.

Here is all you need to know about gaming localization, its challenges, and the potential solutions that a TMS such as Transifex can bring to the table!

Before talking about game localization, it’s essential to understand what localization is in the first place.

In simple terms, localization is all about making a piece of content or product more suitable for a specific location/s. 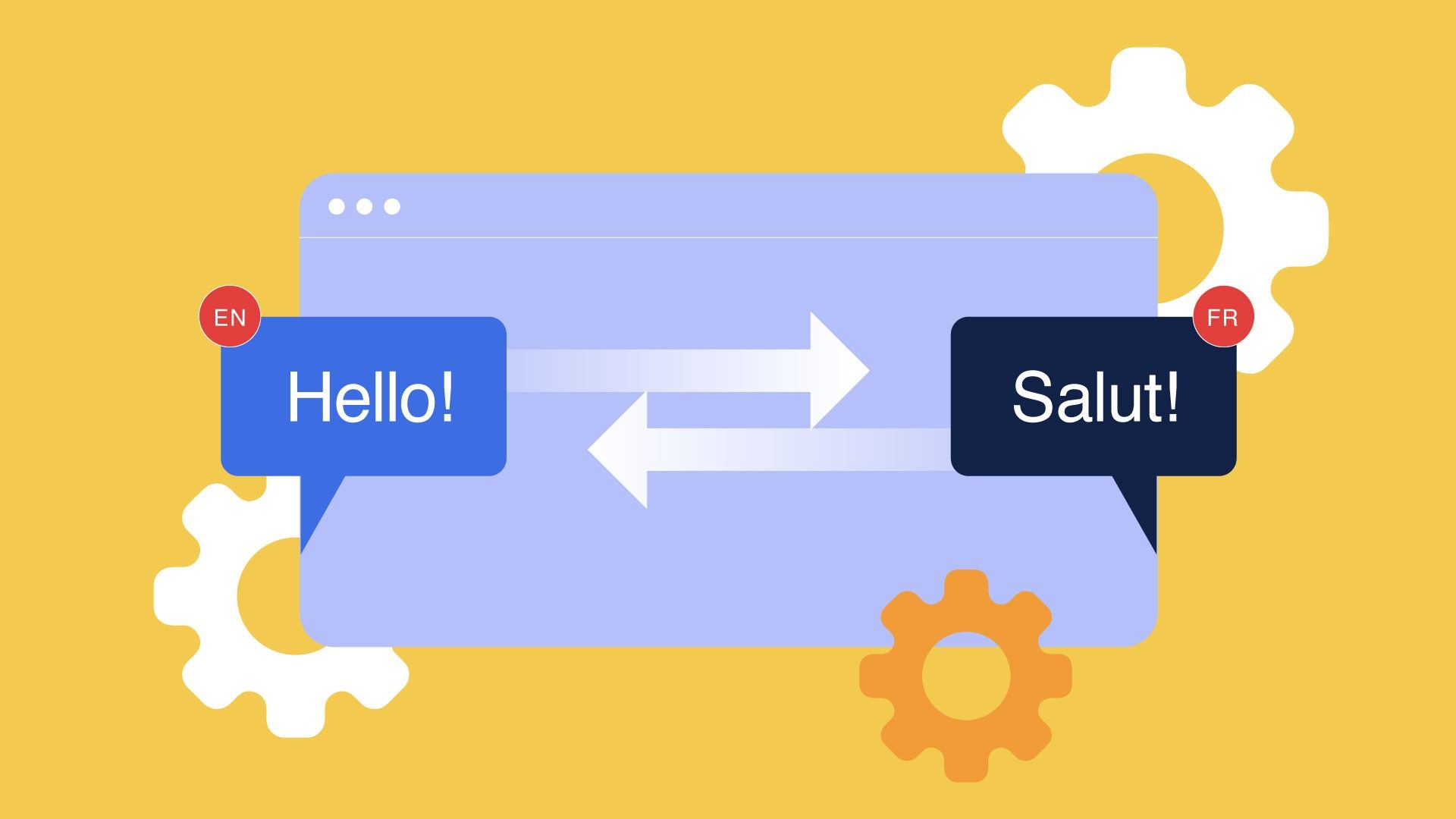 This is a complicated process that often requires you to get multiple things right – things such as translation, image adaptation, internationalization, etc. And video game localization is not an exception to that rule.

And you can localize pretty much anything that has to do with content, including games!

Now that you know what localization is, it’s important to make a distinction between localization and translation.

Translation is just that: translation. All you have to do is take one word or sentence and translate it to another language.

When localizing, on the other hand, you must take into account the target locale then adapt the content accordingly. And the same applies to video games.

For example, let’s picture that you have a scene where the character is taking shelter from heavy rain and says, “It’s really pouring”. A literal translation in most languages would probably turn into, “It’s raining really hard.”, which is technically fine.

However, what if you want to take it one step further and localize that sentence? When it comes to heavy rain, Greeks tend to say, “It’s raining chair legs.” to indicate that we are dealing with really strong rainfall.

That’s the difference between translation and localization.

What is Video Game Localization?

When localizing a game, apart from making anything text-related more appealing to a locale, you also have to deal with other pieces of content such as animations, images, cinematics, etc.

Which is also why games are potentially the toughest piece of content to localize. Most forms of digital content, such as websites or apps, only require you to deal with text and images. Games, on the other hand, have a variety of challenges to deal with.

As mentioned above, localization is not just about translating, it’s also about adapting. In the video game world, sometimes, you have to censor or change illustrations to make a game either more appealing or less offensive.

For example, Wolfenstein, the New Order, is heavily focused on Nazis. But, for obvious reasons, that did not sit well with Germany. Thus, all references to the Nazis had to be re-branded before the game could be released in this country.

Japan, on the other hand, while they didn’t care about censoring Nazi-related content, nudity has always been a problem. And it’s not just about games; Japan even censors pornography. That is why nude characters had to be covered up before the game was officially released in Japan.

And it’s not always about censorship. Many games are also localized for the sake of offering more immersion or a better appeal. Ice Climber in Japan, for example, has seals to deal with as enemies. 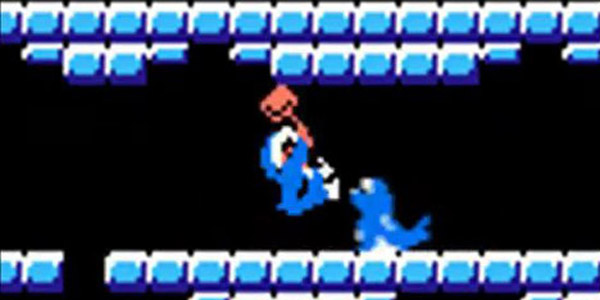 The problem is that this is a reference to seal clubbing in the U.S. That is why Nintendo replaced the seals with yetis in the international version in hopes of them being more appealing and less offensive to American audiences.

Why Bother With Gaming Localization?

There is no doubt that localizing a game can be pricey as well as extremely time-consuming; especially if you are doing it manually with spreadsheets. So, why even bother? Most people understand English anyway, right?

While it’s true that most people nowadays do indeed understand English, that does not change the fact that different locales have different cultures. Localization is not just about translating, it’s also about helping your customers feel familiar with your content.

Customers that feel more familiar with a product are more likely to buy it. So, they get a better experience and you get a higher ROI (Return on Investment).

To be more specific, research shows that you can get an ROI anywhere from 50% up to the thousands or even millions, depending on where your game ranks and the locale that you are targeting.

Not to mention that if you also localize your web content, you increase your chances of ranking in multiple countries, which results in even more customers and a higher overall revenue. 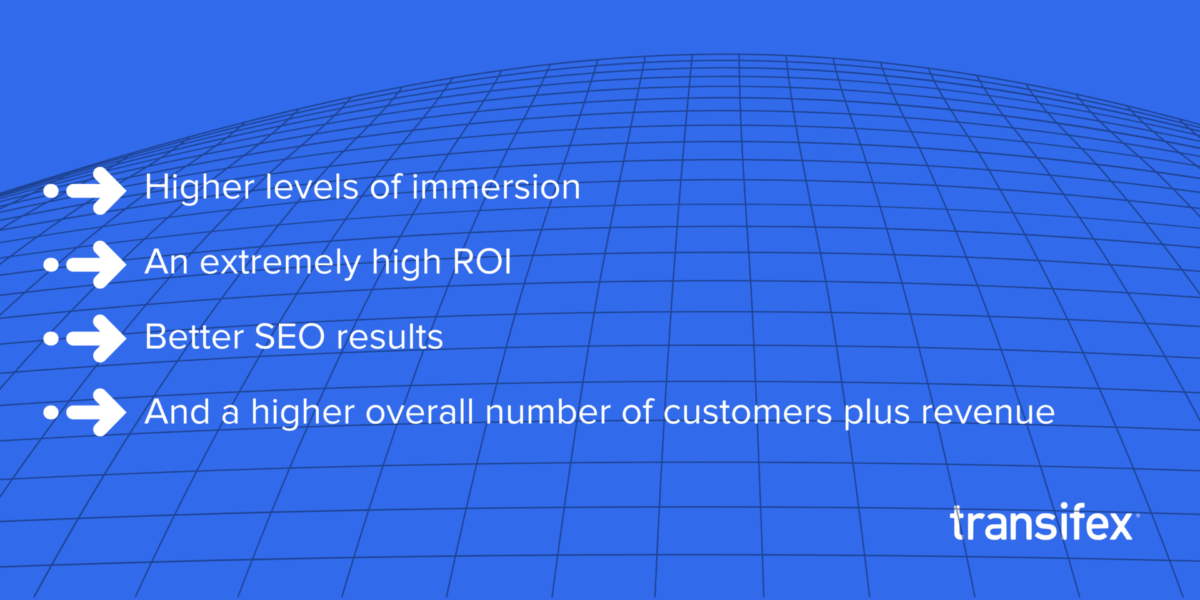 It’s a win-win situation for everyone! Gamers get to enjoy their games in their native tongue and you get more reach plus a higher revenue.

Thus, it’s clear that localizing your game is practically a must. But where does one start with such a huge challenge?

When it comes to game localization, localizing all the different types of content that need to be localized, such as images, animations, voice lines, and subtitles, is no doubt a daunting task. But it’s by no means the biggest challenge.

The biggest challenge when localizing games is the lack of context. Think of games such as The Witcher 3, for example. 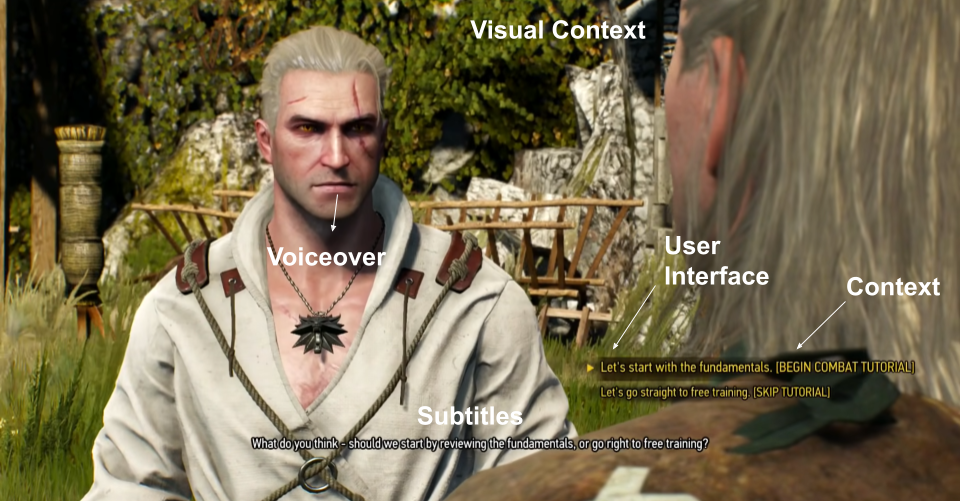 When you create a title with such a huge world, diverse characters, environments, and creative elements, localizing it without knowing exactly what you are looking at can be a huge problem.

What now? Using spreadsheets is not going to cut it as that’s tedious, time-consuming, and gives you little to no visual context – but that’s where Translation Management Systems (TMS) come in!

TMSs give you the option of bringing all of your content along with the localization and engineering teams under a centralized platform – which obviously makes it much easier to localize a game.

A TMS such as Transifex offers a lot of features to make localization easier as well as cheaper, such as:

But the one feature that’s a game-changer, no pun intended, is visual context! Visual context within the translator gives you the option of literally seeing what is being translated with screenshots.

And when it comes to cutscenes, don’t forget about video subtitles as well! A TMS can make a huge difference in video game localization both for the first time and for continuous localization, too. This means that the game’s translations are constantly staying updated as new source updates are coming out for the base game. And these are just three reasons why a TMS makes a huge difference.

Don’t take our word for it. Customers such as Space Ape Games have already mentioned that Transifex helped them reduce 2 hours of work down to a 30-minute-job!

In short, video game localization is a great way to reach more gamers, increase your revenue, while also potentially getting into foreign markets that used to be inaccessible. And while this is a daunting task, a TMS such as Transifex can make it so much easier!

Feel free to give it a try!

The ultimate guide to app localization