In this post, we’ll be exploring the additions we’ve done over the presented Figma and Native workflow, which allows designers, developers, and localization teams to work together on a single project for app localization.

By talking about this with our customers, we’ve come to realize that this workflow introduces a couple of enormous improvements::

After considering these improvements, you’ll probably also agree that this is how the ideal workflow looks like::

Following these steps helps your localization team gain higher levels of flexibility and freedom of action – all while maintaining a single reference point for all global content, either in the source or target languages. In a sense, all teams can work and coordinate continuously over the project in Transifex. 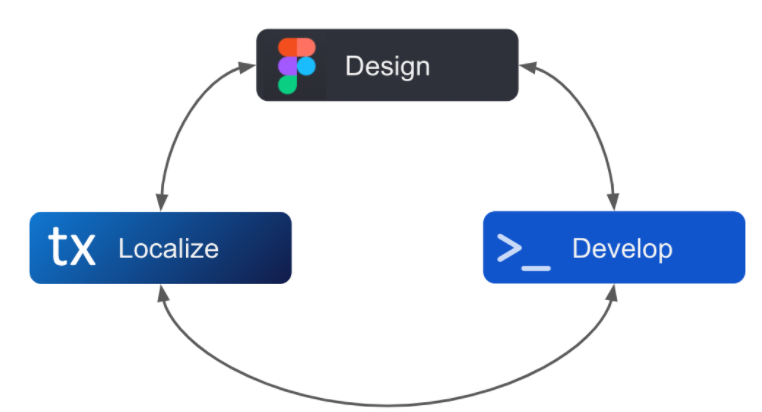 Getting to the implementation

With the latest updates on the Figma plugin and Native SDK, we are finally at the point where the aforementioned workflow is a reality.

Starting from Figma, we have implemented a way to add custom names on phrases sent to Transifex. These names are managed directly from the Transifex plugin in Figma. Enabling this option is available in the plugin settings tab and it is enabled by default.

Customize the Key name into a value that resonates with your colleagues working on localization and directly in the code. The key name you set here will be used in the code through Native SDK to reference the content to display.

By introducing key names we enhanced the Figma plugin to manage any possible conflicts of keys either in Figma or between Figma and what’s already in the linked Transifex project. This way, you have all of the necessary controls to resolve conflicts and manage duplication errors.

Lastly, we’ve added an option for Push & Replace that will replace any copywriting found in Transifex with the one you have edited in Figma. With this option, you can update the content copywriting without affecting the key, thus maintaining a consistent relationship with what people using your application will see.

Moving on to the Native SDK, we took the first step on enhancing the Javascript Native SDK in order to support:

Having described the ideal workflow and the tools developed to achieve that workflow let’s put everything into play.

Designers and Product Managers collaborate on finalizing the experience and copywriting in a mockup. After validating the result with the rest of the team – including developers and the person managing localization – they get things ready to send to Transifex.

Having consulted with the developers they do follow a predefined key naming structure before sending content to Transifex. By repetition, naming conventions are embedded in the workflow. The Transifex plugin automatically considers as key names the name found in the Figma element list, so by typing the naming convention once after creating an object, no further work needs to be done by the designer.

Having the content available on Transifex, the localization team can start right away doing their work. Both designers and developers can get the latest updates either in Figma or in the actual application running on the developer’s local environment.

When feature development and localization is considered complete according to the team’s definition, it is made available to the final users.

Following a continuous iteration, continuous delivery flow and the flexibility that Transifex Native offers, you have many options regarding localization, as content updates can be made even after making the feature available to your users. The localization team can further enhance translations and designers with Product Managers can improve the copywriting of the source language.

We are very excited to offer such a breakthrough workflow and are eager to interact with anyone interested in making this workflow even better! Please don’t hesitate to get in touch so that we do talk about the possibilities!

On our end, we want to make this workflow work for all of the available Native SDKs– and that includes Django/Python, iOS, along with Android, which is coming soon. Additionally, we want to improve how Native content is treated inside Transifex, and offer a way to edit copywriting directly in the editor as Transifex currently does for specific file formats.

For improvements on the Figma side, we would like to hear your ideas and thoughts! A first Figma plugin enhancement would be a tool to automatically set key names based on your rules!