In recent years, computers have advanced to the point where they are increasingly helpful in helping us with languages and how we use them. For example, a grammar checker can help spot errors in our writing, while software can also help us traverse language barriers.

Machine translation software enables computers to take one language and translate it directly into another language of your choice. One example is Google Translate, which is free to use for anybody with an internet connection.

Google Translate is often used by people who want to translate discussions or other text that they find on the internet.

It’s true that machine translation software so far is not particularly reliable. The algorithms are yet to become advanced enough to understand context and emotions in language.

However, they can still give us a general idea of what is being said, albeit with the chance of some unfortunate and embarrassing errors.

Traveling to a different country can be very exciting, with many new things to see and people to meet. It can also be an excellent opportunity to go shopping for items you can’t find back home.

However, in addition to all the excitement, there can also be apprehension, part of which will be down to the language barrier.

It can be challenging to tell people what you are looking for when shopping in a market, and even getting there in the first place can be difficult. A combination of hand signals can help to a degree, but interactions will often end in disappointment and frustration.

This is where machine translation software can come in.

Translation products have already been developed to translate a spoken foreign language, with the user being fed a translation into an earpiece.

A small speaker can help the same person communicate with other people by translating their own words into the local language.

Even just having a smartphone or touch screen computer with an internet connection will help a great deal. With Google Translate or similar, a tourist can type in what they want to say and be presented with the translation almost immediately.

Thankfully, translation services are developing to the point where they can better translate syntax and context between sign language and other spoken languages.

Such a development would help make millions of people able to communicate freely. New job opportunities could open up for them, not to mention the ability to socialize with a wider range of people.

Other languages like Braille present a different challenge. Instead of having the text written on a display, a braille translator will instead need the Braille script to be created physically so it can be read.

Perhaps one option is to have a “dynamic” display that will be able to provide a translation in real time.

Websites are also often developed with multiple languages to help attract a wider customer base. Some businesses even have departments dedicated to working with people in foreign languages.

Smaller businesses, however, are unlikely to have the resources for such infrastructure. But they still need to process the occasional email or other correspondence in a foreign language, which is where machine translation software can help.

Just copying and pasting text from an email into Google Translate is going to give you a rough translation of an email.

And while it’s not a solution for high-end business transactions and accurate localization campaigns, it should at least be enough for basic communication.

Did you know that C-3PO from Star Wars could speak more than 6 million languages? He’d clearly be a good companion here on Earth with its 6,500 languages. While C-3PO is of course a science fiction character, that doesn’t mean that multilingual robots cannot be a scientific fact.

As it happens, some are already being developed. 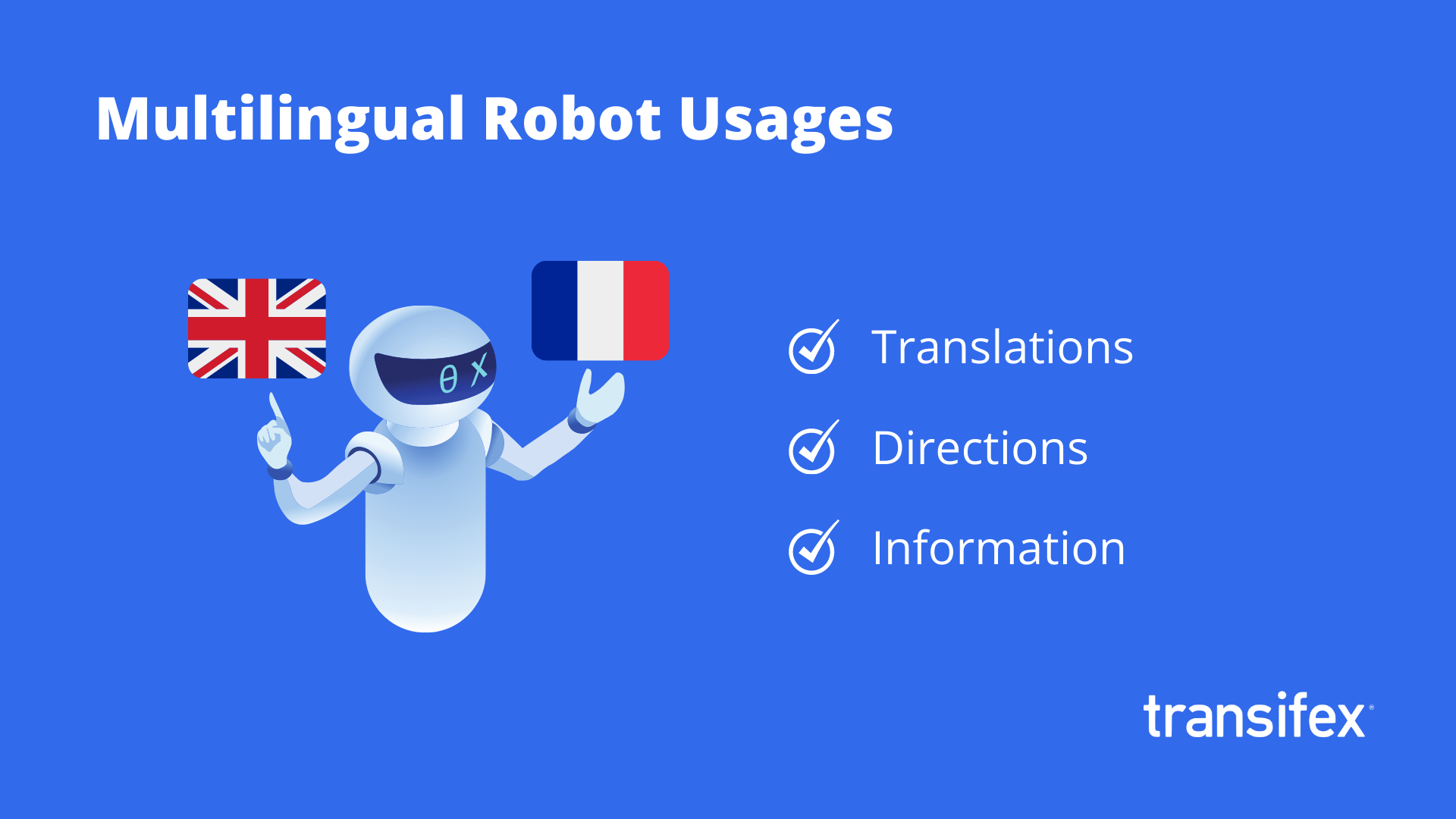 Multilingual robots could be used in a wide variety of ways, such as in hotels or international trade shows. The robots could help to give directions and answer questions as well as acting as a translator between different people speaking different languages.

For guests, it will mean easier communication, the ability to find what they need, and feel more at home. For hosts, it can mean more business as potential buyers feel more comfortable and have their questions answered in a polite and professional manner.

A machine can take a large volume of text and translate it almost immediately. After that, a human translator can go through the translated text and fix the errors or improve the translation, which is how we’d also recommend using Transifex’s MT integrations.

There will likely be a lot that needs to be fixed, and a human translator may also need to review the original text often. But the process is still likely to take less time than having a human do the entire translation from scratch.

With computers and other technology continuously developing, it’s difficult to say what applications may be found for machine translation in the future.

While it is limited in accuracy and reliability today, these issues are likely to be reduced as increasingly advanced algorithms are developed. It’s possible that one day machine translation software or similar technology will develop to the point where language barriers are removed completely.

For now, the technology is useful in a variety of use cases, even if it’s imperfect.

Everything You Need to Know About Machine Translation

Nicholas Rubright
This post was authored by Nicholas Rubright, a communications specialist at Writer. In his free time, Nicholas enjoys playing guitar, writing music, and building cool things on the internet.
Read also
Read All