Today, we’re proud to announce a completely re-vamped version of our Translation Memory (TM) service for all our users. A TM database is a tool used by translators to find similarities between something they are trying to translate, and previous translations. By leveraging previously translated content, translators can speedily and accurately do their job.

So… what’s new with Translation Memory 3.0?

Firstly, we completely re-engineered the way content is stored and the speed in which it’s done. Transifex now presents translation suggestions in real time. This means that if many translators are translating content concurrently, they will immediately see each others’ translations presented as suggestions if they are deemed similar. This is especially handy if you are primarily translating with your user community.

We’ve also significantly improved the accuracy and relevancy of suggestions, regardless of the source language. The following suggestions were derived from the same piece of text, “Project Languages”. Take a look. 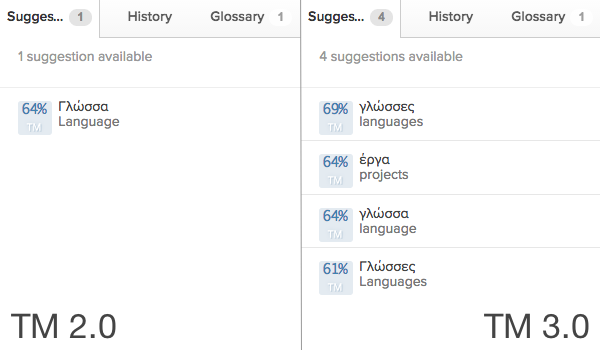 As you can see, TM 3.0 is able to provide significantly improved and relevant suggestions. A translator can now completely translate the string using the provided suggestions.

Additionally, the TM now only considers the most recent version of a translation for suggestion.

If you are on the Premium plan or above, you also get access to the following features.

You can now remove unwanted entries from your Translation Memory by clicking the “x” icon next to a suggestion. Once deleted, a suggestion will no longer be shown for similar translations. 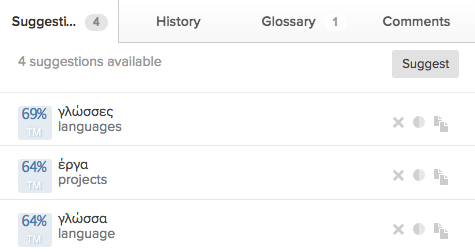 Another way to delete TM suggestions is by navigating to a Project > Manage > Translation Memory. There, you’ll be able to search for a specific term in your source content and see the existing TM entries for strings containing that term. Like before, hit the “x” icon to remove an unwanted entry.

In the past, an organization was able to only have a single multi-project TM group. Now, you can enjoy multiple TM groups (groups are managed under Dashboard > Settings > Translation Memory). This will improve consistency of translations across projects since translators will get 100% matches from a unified pool of strings.

Note: Those on the Plus plan can still create a single TM group within their organization.

Just because a file has 750 words, doesn’t mean all of those words need to be translated from scratch. With TM 3.0, you can see reports that show how much of the content being translated matches what’s already been translated before. For example, if 450 out of 750 words in your file has a 94-75% Translation Memory match, then you know translations shouldn’t take as long as translating those 450 words from scratch.